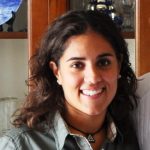 I graduated with honours in Classical Literature at the University of Catania, with a Greek Philology thesis  entitled “The apparent death topic in the ancient Greek novel”. I am currently attending a Master’s degree course in Classical Literature at the University of Siena and as a final-year student I am writing a thesis in Latin Palaeography. My work consists of carrying-out a codicological and palaeographic description and analysis of two rare illuminated Latin manuscripts of the twelfth century. These are of the few surviving manuscripts of the Norman Sicilian period that are still in the Island.

My project focuses on comparing the liturgical manuscripts I am analyzing for my thesis with similar Italian or French liturgical manuscripts of the eleventh, and especially of the twelfth, century.  These are lectionaries, evangeliaries, or sanctorales written in Carolingian minuscule. The expected outcome of this work is to identify particular local usage introduced by the Normans in Sicily.