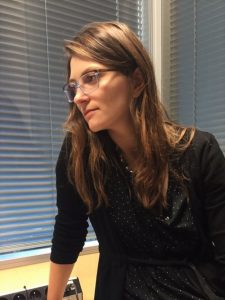 Magdaléna Jánošíková is a first year PhD student in history, supervised by Prof. Miri Rubin. Prior to joining Queen Mary, she was trained in Medieval and Early Modern History (M.A., 2013) and Jewish studies (M.A., 2012 and M.St., 2014) at Palacky University in Olomouc and Oxford. Throughout her studies, she has specialized in the history of Ashkenazi Jewry. Under the supervision of doc. Tamás Visi (Palacky University), she was introduced into Hebrew manuscripts and their fragments in Czech libraries, which she helped to catalogue. Ever since she has been working mainly with unedited materials, focusing on understanding writing habits and compilatory practices in the times after the invention of book printing.

Her current academic interests lie in the history of medicine. The dissertation will discuss the medical writings circulating among Ashkenazim of the 16th century. By analyzing the different genera of medical writings, Magdaléna explores the changing nature and place of written medical knowledge in the late Renaissance. For the DEMM project, she will collate the various recipes found in Hebrew and Yiddish recipe books.