Ella Kilgallon is a second year AHRC PhD student working under the supervision of Professor Miri Rubin (Queen Mary University of London). She holds a BA (Hons) in History from The Univers 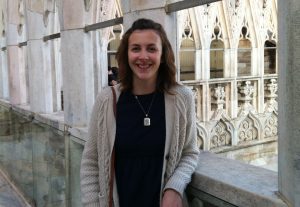 ity of Nottingham and an MA in Medieval History from King’s College London. The working title of her doctoral project is: ‘Seen or Unseen?’ Spatial Practices and Issues of Visibility in the Lives of Duecento Central Italian Female Tertiaries’. This project aims to investigate the realities, or at least the promoted ideals, of the spatial freedom of female members of the early Franciscan third order. More broadly her research interests include the secular religious culture of urban centres, the experience of pilgrimage (real and imagined), and the role of iconographic art and architecture in understanding religion.

For this project Ella is working on a largely unknown and recently discovered Italian vernacular manuscript of the life of Angela da Foligno at the British Library. Having completed initial research into this manuscript it has been dated it to the late fifteenth century and grouped with a pre-existing family of manuscripts from Perugia. She aims to produce an edition of this family of manuscripts in order to compare it to its much earlier Latin siblings.