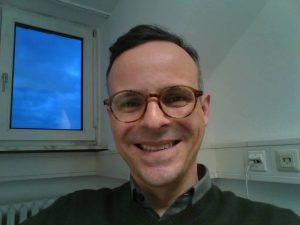 Andrew Irving received his doctorate in Medieval Studies from Medieval Institute of the University of Notre Dame, with his codicological, palaeographical and liturgical study of eight gospel book manuscripts of the Abbey of Montecassino entitled The Eleventh-Century Gospel Books of Montecassino: An Archaeology. As a post-doctoral associate at Yale’s Institute of Sacred Music (2012-2013), he began a long-term research project into design changes in books for use in the Mass in the course of the long twelfth century. After two years of teaching church history in New York, Irving joined the Digital Medieval Schoolbook Project of the University of Notre Dame. Based this year at the Cologne Center of eHumanities, the project studies the transmission, translation, and commentary tradition of the Disticha Catonis from its composition through to the end of the sixteenth century. A database of extant close to 1000 manuscripts containing the text, its translation, and/or a commentary is in preparation. The principal investigator, Prof. W. Martin Bloomer, and Dr. Irving have recently agreed to edit Erasmus of Rotterdam’s popular commentary on the Disticha for the authoritative Amsterdam critical edition. We also plan a digital edition.